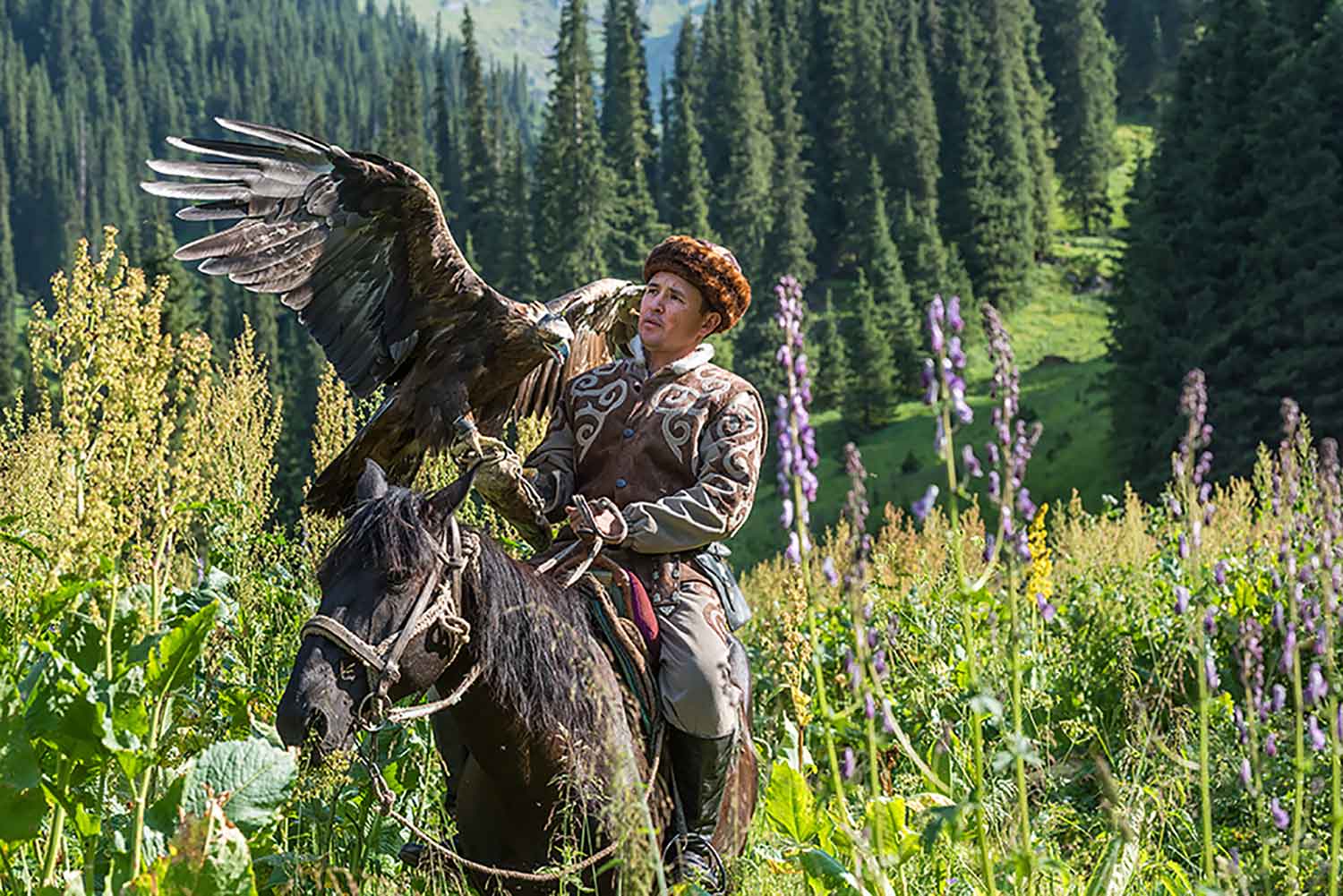 Taming a bird is a complicated process

You must admit that no one remains indifferent when watching a berkutchi or a falconer having his pet on his arm and sitting on horseback. Handsome men and slim women in national dresses are looking quite attractive. When you see how a master and his bird are working closely together, how a huge berkut is taking quarry or a falcon is circling the steppe in free flight and then returning on his master’s (kusbegi) arm – all these are taking your breath away. But behind this beautiful picture a great deal of work, sometimes many years of work, is hidden, because taming a bird is a complicated process.

“Hunting with animals (greyhounds, cheetahs, hunting birds) has always been cultivated in the Eurasian steppes; this is evidenced by archaeological digs and ancient manuscripts telling about nomads’ household”, – this is what Assylkhan Artykpayev, local historian, biologist, hunting expert, writes in one of his publications devoted to hunting birds. – Gradually, this type of hunting had been widely disseminated among nobility of many states in Europe and Asia. In the Middle Ages hunting with birds was a prerogative of monarchs’ yards of Europe, Persia, India and China; while on the territory of ancient Kazakhstan all patrimonial and tribal consolidations were engaged with hunting, mainly people of average and advanced age. Hunting birds had always been very valuable – a berkut or a falcon was considered as sacred birds, and a random person couldn’t deal with these birds.”

In the old times chicks were taken straightly from nests and prepared to be hunting birds. People were observing a nest from the moment of egg laying. Moreover, they were living not far from it up to the moment when chicks started leaving the nest. People had enough time to learn biological features and predator habits in the natural habitat. Kusbegi (falconers) knew that comprehensive development of a chick can only happen under the parental wing. Therefore, people took chicks away when they became fledglings, just prior to leaving their nests.

Adjustment to men has always been the first stage in preparation of a hunting bird. During first hours after taking chick out of its natural habitat, a hunter should be spending almost all his time next to the bird. During that period the bird was kept on “yrgak” (a swinging falconery block used at the beginning of bird’s training), and from time to time hunter was stroking bird’s chest preventing from falling asleep. After some time tired bird started getting used to the hunter.

Today chicks of berkut, falcon or hawk can be bought in the farms of Europe and Russia. One birds’ farm exists in Kazakhstan as well.

It poses an obvious question: what is the difference between chicks taken out of nests and those taken from farms? Modern kusbegis reply: “There is no difference.” Love of liberty and fear of humans are coded genetically in every single bird. Therefore, the first stage in farm bird’s training is the same – adjustment to a man.

This is how Bakhyt Karnakbayev, vice-president of “Burkytshy” Kazakhstani Association for National Sports and assistant to the president of International Association of Falconers in Central Asia and Kazakhstan, describes the process of taming a hunting bird as for him this is not simply a hobby but a whole lifestyle: “A bird can be taken from farm at the age of around 3 months old: at that time the bird is able to fly and eat without assistance. Predators raise their chicks in March-April (but this is true only for Kazakhstan, Russia and Europe; there are other terms in Africa and Argentina), and in July-August chicks take their first flight and start hunting.

In the first month a bird is getting used to a man: it is necessary to have bird on your arm for 3-5 hours during a day, to feed the bird only from your hand in glove so as the bird could associate you and the glove with a source of food. With this, it is important to feel balance while feeding the bird, because a well-fed bird will never work for you. But, at the same time, if the bird is exhausted it can’t fly, to say nothing about taking quarry. Without mentor it is hard to acquire this skill of feeding the bird in a balanced way.

It is time for hunting!

Later on, when the bird sits calmly on your arm, eats out of your hand, allows you to stroke, knows your voice (yes-yes, it is necessary to talk to the bird all the time), it is time to start feeding bird at the distance of 30-50 cm. When you show meat on your glove, the pet should jump on your arm and eat that piece of meat. On this very day you will need to feed the bird in that way and to stop training process. Next day the distance can be increased up to one meter by calling the bird up. And then every day you will need to increase the distance from 100 to 400 meters.

When the bird will know its master well enough to fly up on his arm after calling, together with the distance increasing, you may start teaching the bird how to hunt. For this purpose you will need attraction: a piece of meat is tied up to wings of pigeon or skin of hare. When you take a rufter hood (the hood that covers head and eyes of predator) off bird’s head and pull the skin with meat, the bird sees moving target and then attacks it.

Taming of a hunting bird largely depends on the type of bird: berkut is a heavy, strong and dangerous bird; training of a falcon or a hawk has other nuances. For each three types of hunting birds that exist in Kazakhstan there is a separate method of training.

A bird is not like a dog – training requires more time

“In order to tame a bird you will need to spend your time next to the bird and live outside the city”, – Bakhyt Karnakbayev tells.

“A bird is not a dog to learn all commands only once and then remember all. The bird needs annual trainings because of short hunting seasons – from November to January. After that you will need to put the bird on enhanced diet until next autumn, when it gets maximum of vitamins, and also to pass through shedding period that lasts for 5-6 months; after shedding period in August-September you will repeat your training from the very beginning – holding the bird on your arm, training it every day etc. Because in the course of a year, when bird sits and eats well, it gets used to comfortable life and does not hunt if you do not train it! A bird is like a good pedigree horse that participates in racings needs constant training to be in athletic shape. Most part of the year you feed and take care of your feathered friend, and, if the bird is smart, you train it for a couple of months (sometimes more) so as to spend several months in hunting activities.

The bird is very expensive and, mainly, recorded in the Red Book, so it is necessary to minimize mistakes in its housing and training. It is possible to achieve if a hunter is truly committed to his business, lives with this every day of his life, not from time to time, and has got a mentor.

We must say that revival of traditions related to hunting with hunting birds is on agenda of the government officials as in many regions these traditions are almost lost. Previously, in each aul (village) there was a knowledgeable person but now it is very rare. That’s why “Burkytshy” federation under Kazakhstani Association for National Sports had been established at the time. Its offices are functioning across the country. Federation specialists teach all interested people basics of bird housing, feeding, explain many nuances including how to tie up the bird, where and how it should sit.

In the course of such lessons one understands if he really needs to commit his life to feathered predator.

Where you can see hunting birds?

Today on the territory of Kazakhstan there are several annual festivals, tournaments of hunters with their hunting birds. Undoubtedly, these are very interesting and attractive as for Kazakhstani people as well as for foreign guests.The largest festivals take place in Almaty region in Ilantau natural boundary next to Nura village, and Kansonar tournament in Akmola region. As a rule, today tournaments are like theatrical performances: as a quarry for hunting birds they use stuffed animals. Exercises that show relationship between a bird and a man are very entertaining: “Burkitty kolga shakyru” – “Calling a bird on master’s arm” when hunter calls up his bird at certain distance. Or “Yerikti ushu” – “Free flight” when hunter dumps off berkut up in the sky and then calls up.

Tourists may take part in real hunting but that will be an exclusive tour to be arranged by a travel agency. In any way, either a free of charge festival, or an expensive individual tour – both events won’t leave you indifferent!

*Kusbegi is a specialist who trains a berkut, a falcon or a hawk.