Discover a heaven for birdwatchers: the best birdwatching destinations in Kazakhstan 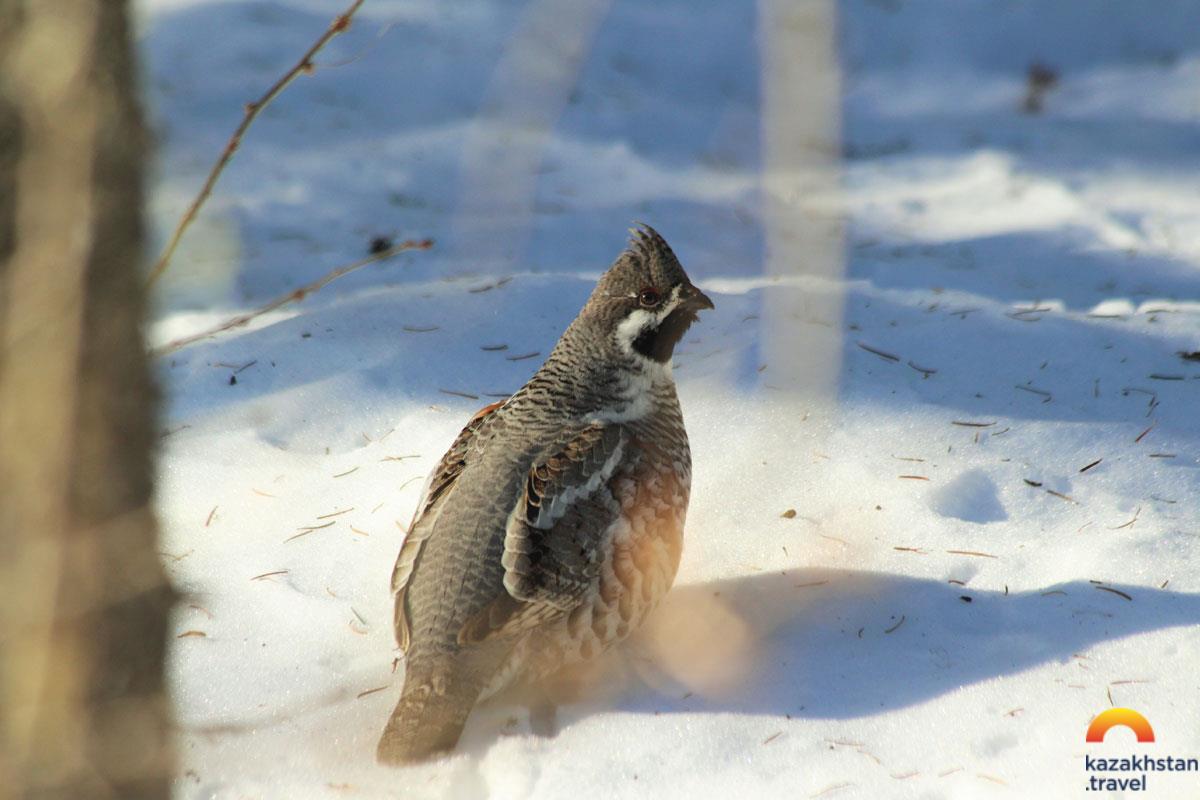 By watching the birds we experience the world, become purer and better, learn to treat nature with care.

Did you know that a real person was a prototype for James Bond? He was an ornithologist from Philadelphia, an expert in Caribbean birds. Ian Fleming, who was keen on birdwatching when living in Jamaica, was familiar with Bond's scientific works and chose the name of their author for the principal character of his story "Casino "Royale". Even Presidents Franklin Roosevelt and Jimmy Carter were interested in birdwatching.

In Europe and America, the number of birdwatchers is really impressive - more than 80 million people. For Kazakhstan, this hobby is relatively new with only a few hundreds of fans across the country. But, of course, Kazakhstani birdwatching has a great potential. After all, in such a huge territory with a variety of landscapes and great number species of birds (more than 500) both local and foreign birdwatchers can always find what to look at.

In addition to the aesthetic pleasure and new emotions, birdwatchers keep record of new bird species ("lifers") which they have seen. And they have seen them in the wild rather than on TV or in the zoo.

This is where one can see everything at once

Costa Rica is recognized to be the richest country in the world in terms of birds population. There are more than 800 species of birds! In the world there are about 10.5 thousand. In Kazakhstan, according to the Field Register of Birds in Kazakhstan under the editorship of famous ornithologist Anatoly Fedorovich Kovshar' there is a lot of birds too - around 500 species.

Most birds in a short period of time can be seen in Almaty Province. In this southern region of Kazakhstan in May-June (period of migration and nesting) more than 260 species of birds can be found. This is our "classics" to start with.

It is here, where the highest mountains of Central Asia Tien Shan and contrasting deserts are neighbouring, only in five days your listing can be substantially replenished with a wide variety, including rare species, of birds. In the mountains the most desirable trophies for foreign birdwatchers include sicklebill (Ibidorhyncha struthersii) and painted tit-warbler (Leptopoecile sophiae), white-tailed rubythroat (Luscinia pectoralis), Himalayan snowcock (Tetraogallus himalayensis), bearded vulture (Gypaetus barbatus) are also interesting to watch.

Amateur watchers, will certainly appreciate another inhabitant of the mountains - chuckar (Alectoris chukar), or, as it is called, the chuckar partridge. Among these 18 subspecies there are four in our country, in Almaty Province they are Alectoris chukar falki and Dzungarian Alectoris chukar dzungarica. Chuckars are easy to spot as they are large enough, behave freely, often make their presence known by calling and live in large groups. Watching them during nesting season is particularly interesting, usually plumed quails have coveys of 10-15 chickens, which, like all children, behave in a very amusing way. For an amateur birdwatcher it is a great object to watch.

The desert is rich in other interesting objects to watch. They are sandgrouse: pin-tailed sand grouse (Pterocles alchata) and black-bellied sandgrouse (Pterocles orientalis), Pallas's sandgrouse (Syrrhaptes paradoxus), Mongolian finch (Bucanetes mongolicus). Experienced guides, who are aware of the location of small lakes, subsoil springs in the desert, can unmistakably take you to a watering place of many species of birds, including rare ones. So enjoy it if the weather forecast promises several days of burning sun. Rain can destroy some of your dreams to come true, till the next trip.

Newbies are recommended to visit the Sorbulak lake system or other small reservoirs away from Almaty, because these are the lakes where you can see several dozens of bird species. That will certainly heighten your interest and give impetus to further birdwatching.

During the autumn migrations near Almaty you can observe large groups of gray cranes and demoiselle cranes. Once, just 20 km away from the city, I happened to be watching a mixed group of about five thousand cranes. The field along the road, where the birds landed to feed themselves, was behind a dense side of reeds and from the side of the road one could see nothing. We first heard them! At hand these majestic, graceful birds look much more impressive than high in the sky!

Tropical birds in the Southern Kazakhstan

After having studied the "classics", you can travel further, to meet birds living or nesting in other regions. So, only 700 km from Almaty in Maliy Karatau Mountains, there are nests of a paradise flycatcher that flies to us from India. This small tropical bird from the family of the monarchs got its name owing to the colourful tail. It is not easy to see it among the greenery and branches, but it is easy to recognize it: their head, chin, throat are black with a strong blue sheen, their back, wings, and tail are brownish-red, breast and belly are grayish or white, it has a strong beak, bare dark blue rings around dark eyes. White-throated Robin (Irania gutturalis) is as beatiful as the flycatcher. Especially it is impressive when it flies around its nesting area with its sonorous song.

It is here, where the big syke (Hippolais languida) and the Stuart bunting (Emberiza stewarti) nesting, but, unlike very exotic paradise flycatchers, these birds will be of more interest for the experienced experts.

The mountains here are covered with sparse forests of juniper wood, so there are lots of birds that are not present in the Northern Tien Shan. One of the most interesting of them is rare resident bird - rufous-vented tit (Parus rufonuchalis).

Relict gull as a symbol of Alakol Nature Reserve

In the East there is Lake Alakol, where among many species of waterfowl, a rare in the world relic seagull (Larus relictus) lives. In the spring it appears at the end of March-April in small groups. The birds nesting in colonies, often in conjunction with the great black-headed gull, gull-billed tern, and Caspian tern.

It is not surprising that here, on the shores of the lake, the first and only festival of birdwatchers "The wings of Alakol" has been taken place for several years, in early May. The Festival gathers bird lovers from all over Kazakhstan and even from abroad. The organizers provide the participants with necessary equipment for bird watching as well as with transport to move around. In the evenings, professional bird watchers share their knowledge with newcomers.

By the way, to see the relic seagull, you do not need to go to the territory of the reserve; separate pairs of seagulls move along the entire coast, where you can not only watch but also take pictures of them.

Flamingo - a child of the sunset

In the heart of the country, near Nur-Sultan, on the territory of Korgaljyn Nature Reserve a colony of pink flamingos (Phoenicopterus roseus) lives. Flamingo population per season reaches up to 60 thousand birds. The best time for watching them is autumn - in the migration period when, prior to leaving for the winter for Iran, Afghanistan, Pakistan, flamingos gather in groups.

Western Altai Mountains in the Eastern Kazakhstan Province are fascinating for foreign bird watchers, primarily, because of the presence of the solitary snipe (Gallinago solitaria), pintail snipe (Gallinago stenura), Swinhoe's snipe (Gallinago megala). Among Kazakhstani this region is popular due to Siberian birds not found in other regions of the country, like hazel grouse (Tetrastes bonasia), Siberian jay (Perisoreus infaustus), grey bullfinch (Pyrrhula cineracea), Siberian rubythroat (Luscinia calliope), and etc.

Bird watching as a hobby is definitely useful, both for the soul and for the body. By watching the birds we experience the world, become purer and better, behave more carefully with the nature. In addition, our physical endurance increases, because it sometimes takes a lot of physical effort to reach an interesting bird: climb up a mountain, slogging through the wild, walk many kilometres. But this is only when the excitement appears and in order to start, you can watch the birds right in the backyard of your house! Believe me, you will be very surprised at what a "parallel universe", where birds live in, surrounds you!