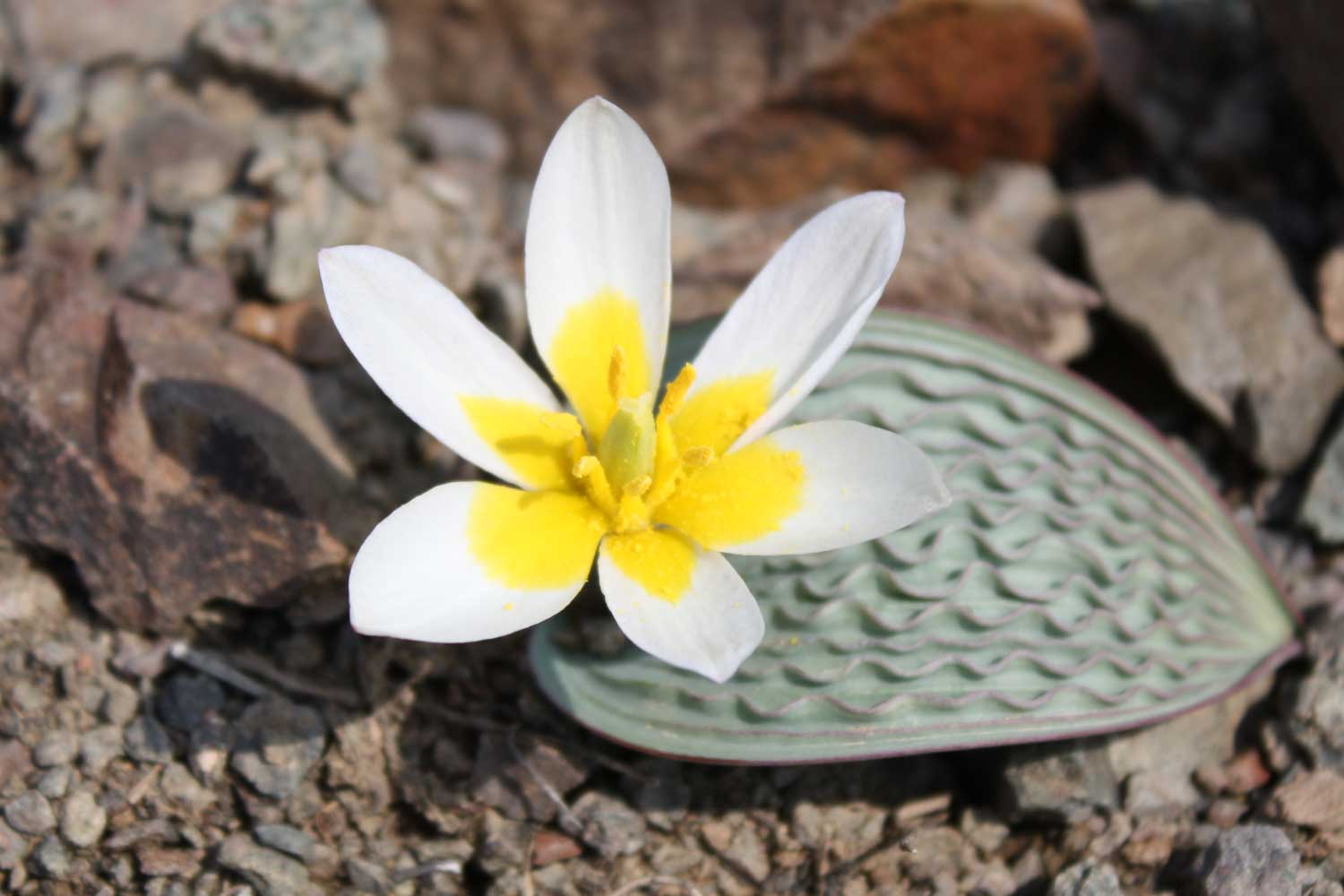 Did you know that Kazakhstan is the birthplace of tulips? This fact is recognized throughout the scientific community.

With the arrival of spring in Kazakhstan there is a drastic change that takes place on the steppes. This is the changing of a picturesque landscape of blankets of white snow, where the sleeping winter has awakened, into an array of beautiful shades of red, yellow, orange, white, and semitone. These tulips sway in the winds as if they have been placed on a canvas by an inspired painter whose strokes seem to be almost endless like the steppes.

Kazakhstan is the home of the tulip

Tulips first appeared in Kazakhstan more than ten million years ago. From here they have subsequently spread worldwide, to countries like the Netherlands, that many people consider their birthplace. But this was only 400 years ago, the ancestors of those original tulips are believed to be the Schrenk’s tulips. Nowadays the Schrenk tulips can be found near the Black Sea, in Turkey, in the northern and central regions of Kazakhstan.

There are around forty different kinds of the 65 known species of tulips in Central Asia (this is more than half of all the known wild tulips is a kind of wild flowers in the world) that grow in Kazakhstan, and according to the leading scientist, this is far from the total figure. After all, only in recent years the Dutch and the Kazakh botanists have discovered and began to describe three new species – the tulip of Lemmers (Tulipalemmersii), the tulip of Kolbintsev (T. kolbintsevii), and the tulip of Ivanshchenko (T. Ivansczenkoae), that are all found in the mountains of Western Tien Shan and Jetysu (Dzungarian Alatau).

It is worth noting that 11 species out of the 40 are endemic to Kazakhstan, and 18 are on the Endangered Species List.

The flower of the Turkic People

This flower is represented on many national ornaments of the Turkic peoples. "Tulips became particularly popular in the Turkic world in the first part of the 18th century, during the reign of Ahmed the III. The sultan and his associate Grand Vizier Damad Ibrahim Pasha loved these exquisite flowers. They spent a lot of money to purchase them, and even bred new varieties. This period in time went down in history as the “era of the tulip (laledevri)”, said Rustam Batyr, the first Deputy Mufti of Tatarstan.

There is a lot of evidence of the tulip being worshiped in Kazakhstan, too. There are ornaments and colorful paintings depicting tulips on tiles and bricks of the mausoleums of Aisha Bibi and Khoja Ahmed Yasawi.

Perhaps, in our time we will witness the renaissance of love for tulips in Central Asia. Maybe, Kazakhstan will enter into its “Tulip Era?” The tulips in spring in Kazakhstan have attracted the attention of environmental tourists from all over the world, especially, from Western Europe and Japan. With thanks to the flower festivals and celebrations, there are well-developed tours to these sites where the tulips bloom, for example, tours orchestrated for children, students, and anyone interested in seeing these beauties. Here one can truly admire these amazing creations of nature from late March to mid-July.

The breathtaking scene will not only warm your soul but will also leave you mesmerized! Today Kazakhstan hosts the thematic festivals: “Kyzgaldaktyn Otany – Kazakhstan” and the “Holiday of Tulips” in Aksu-Jabagly Nature Reserve.

By knowing the approximate locations of certain tulips, you can get to them by car, or through organized tours by travel agencies. Of course, tulips can be found everywhere, both in the northern plains (Tulip Revoluta – T. Patents, Tulip of Bieberstein – T. Biebersteiniana), in the steppes and the semi-deserts (Tulip of Bohem – T. Behmiana), in the foothills of the mountains, and in the Alpine meadows (Dasistemon Tard Tulip – T. Dasystemon, Heterophyllus Tulip – T. Heterophylla), in the green meadows of the Western Tien Shan among the juniper wood and water-lily tulip (T. Kaufmanniana).

To not bore you with the countless species of Tulips we will only mention the most familiar tulips that you may already know or didn’t know much about. So we will give you a little information about some fascinating tulips and when and where to enjoy their blossoming in Kazakhstan.

The Tulip of Greig (T. Greigii). In some places you will be amazed of the vast meadows of tulips with their density ranging up to sixty flowering specimens in a square meter with red hills that are visible from several kilometers away. Most of these areas are dominated with the Greig Tulip, that are located in the Turkistan Province – Aksu-Jabagly, Karatau Reserves, Sairam-Ugam and Syrdariya-Turkistan National Parks, as well as in the “Krasnaya Gorka” botanical reserve. There are also two reserves in the Jambyl Province – Berkary and Merke.

Water-Lily Tulip (T. Kaufmanniana). Among the Tulip species in Kazakhstan, the Water-Lily is among the most common and is the ancestor of over two hundred cultivars. It is found in the mountains of Western Tien Shan (from the Ugam range to the western parts of the Kyrgyz Alatau) and Karatau. Flowering begins at the end of March and lasts until the end of June, in the low mountains, and in the upper parts of the mountains this  blooming tulip origin period may even extend until the beginning of July.

Tulip of Albert (T. Alberti) is considered endemic in Kazakhstan as it is included in the Endangered Species List. It can be found in Syrdarya Karatau, also in the Shu-Ile Mountains, parts of the Betpakdala Desert, in the Chulak Mountains, and on the shores of the Kapshagay Reservoir. This magnificent flower blooms from early April until the end of the second week of May.

Tulip of Ostrowsky (T. Ostrowskiana) was described by E.L. Regel in 1884. It can be found near Almaty, growing on the slopes among the bushes in the lower and middle zones of Ile Alatau, the southern parts of the Shu-Ile Mountains, and to the east of the Kyrgyz range. These flowers tend to start blooming from late April to the middle of May.

Tulip of Regel (T. Regelii) is one of the most genuine out of all of the Kazakhstan national tulips, described by N. Krasnov in 1887. Based on samples from the Shu-Ile Mountains, which is a birthplace of this regal flower. It grows in between the rocks, stony slopes, and rocky ledges, in the arid and tropical habitats. This ancient species, that grows across a wide range of the Shu-Ile Mountains to the Valley of Kurta, grow down the river and into the south by the Jambyl Mountain. This flower blooms from late March to early April.

Tarda Tulip (T.Tarda) is another very distinguished member of the tulip family. It blossoms from mid-April to mid-May. It grows on the rocky dry gravel slopes, in the thickets of shrubs in the lower and middle mountain ranges. It is located in the western part of Ile Alatau and Jetyjol ridge – from the ravines of Uzun-Kargaly to the Karakunuz Gorge. The tulips are kazakh national flowers. The specimens with the pure yellow flowers are found in the latter gorge more often than in other places.

Tulip of Bushe (T. Buhseana) is found in the southern regions of Kazakhstan – from the Aral Sea to the Balkhash-Alakol Basin (southern part of Aktobe, Kyzylorda, Turkistan, Jambyl, and Almaty Provinces). The Tulip of Bushe blooms in late March and April. In Kazakhstan there is a tradition to give tulips on holidays, especially on March 8.